Travel the World with This Pumpkin Soup 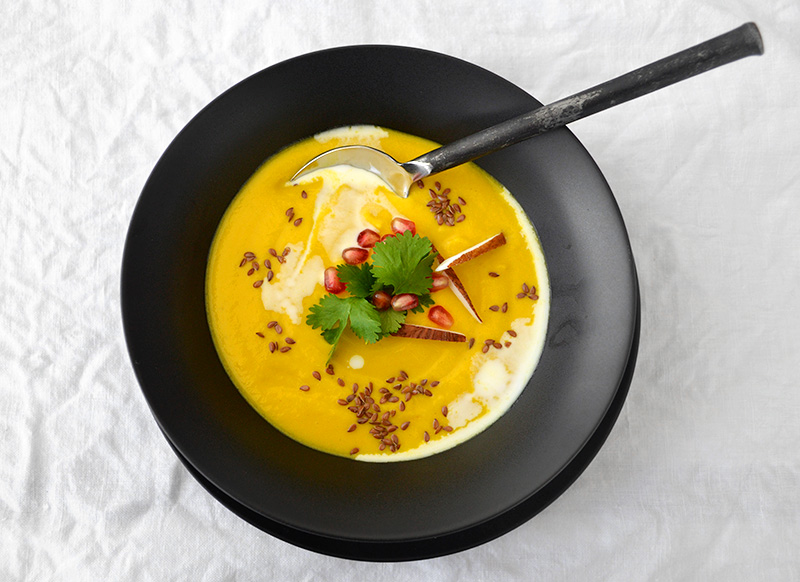 It’s a pumpkin soup with a twist, the benefit of the turmeric, the aroma of the cinnamon. The touch of garam masala and subtle flavor of the coconut milk are like the air of an Indian influence passing through my kitchen. Exciting without being spicy. The citrus of the orange juice in the soup transports me to a British countryside —well actually, it transports me to a small English tea room on Federal Highway in Fort Lauderdale in the late 90s. It was run by two lovely British ladies, though I think it might have actually been owned by a French couple. Unfortunately it is now closed, an English tea house was a rare find in South Florida. I used to meet a friend there for tea, sandwiches, and pumpkin soup. I always loved the pumpkin soup. I imagined I was teenager again at a tea house in the British countryside enjoying my comforting bowl of soup.
I make pumpkin soup year round, but the difference is what I add to it. And it’s so fun and easy, maybe because it’s like a simple, comfortable dress that you love and can wear anywhere, making a different look by changing accessories and hairstyle. For summer I love to make it with leek, apples, butter and top it with fresh cilantro. During winter, ginger, nutmeg, cream. I may even add a pinch of cognac too. When I want to be in France, herbs du provence and crème fraîche. Venezuela, it’s chicken broth, onion, butter, and leek. Whatever garnish you chose, croutons, toasted pumpkin seeds, caramelized fruit, seeds, herbs, creams, they all change the soup, we can travel with it changing our moods and settings. 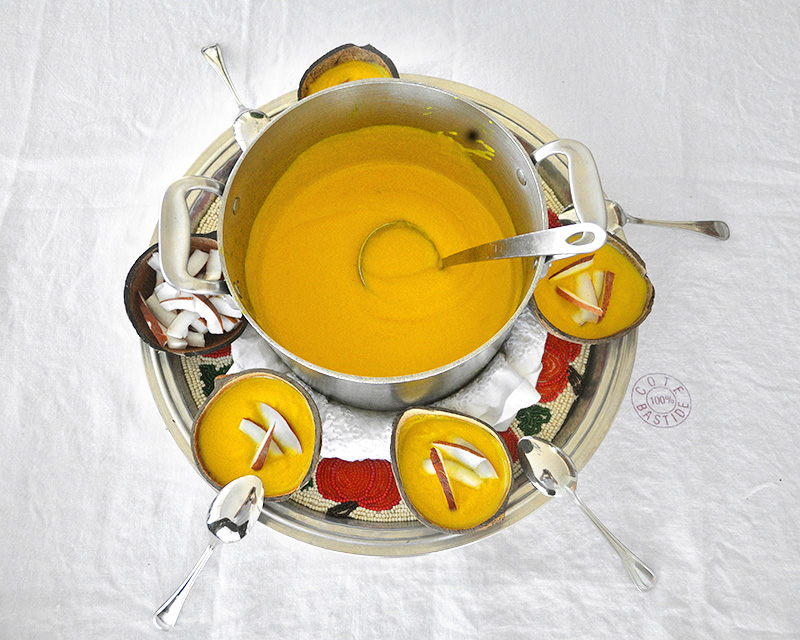 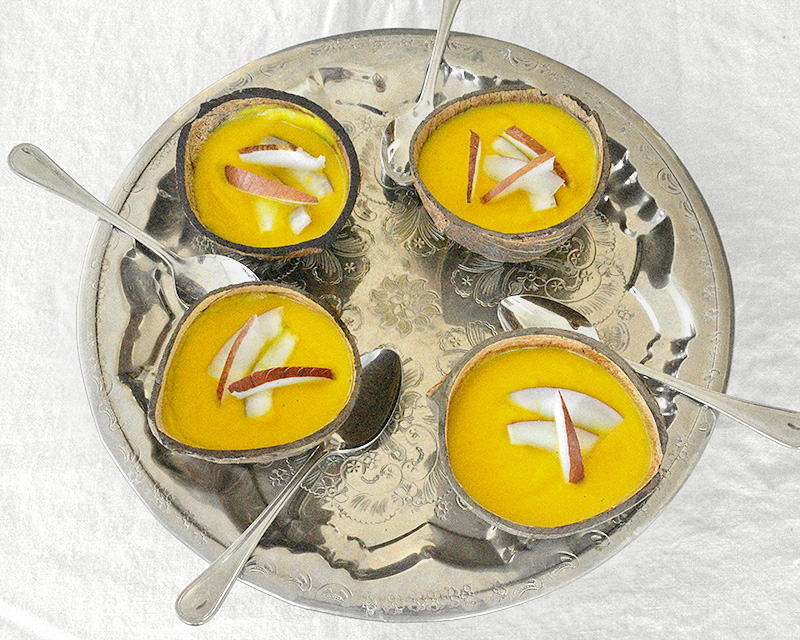 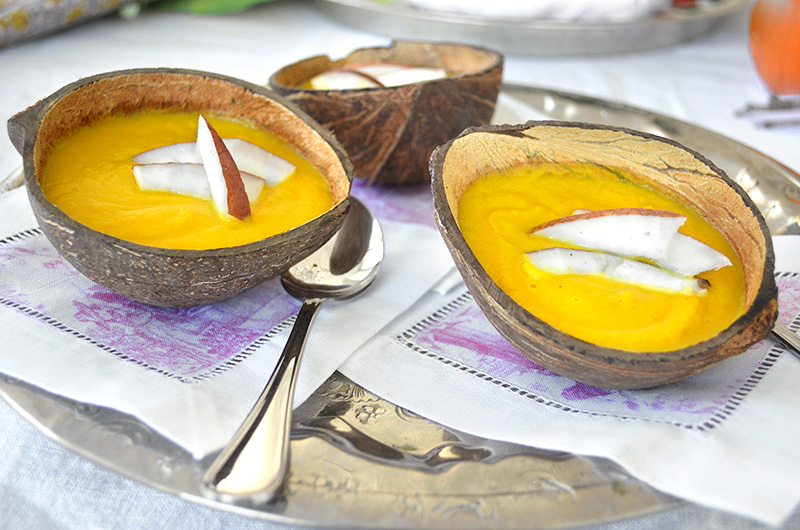 While taking Nicolas, my dear spoiled Shih tzu, out for a walk I came across the spanish moss in the pictures. It grows on oak and cypress trees here. They were wonderful a acquisition for my Halloween table. 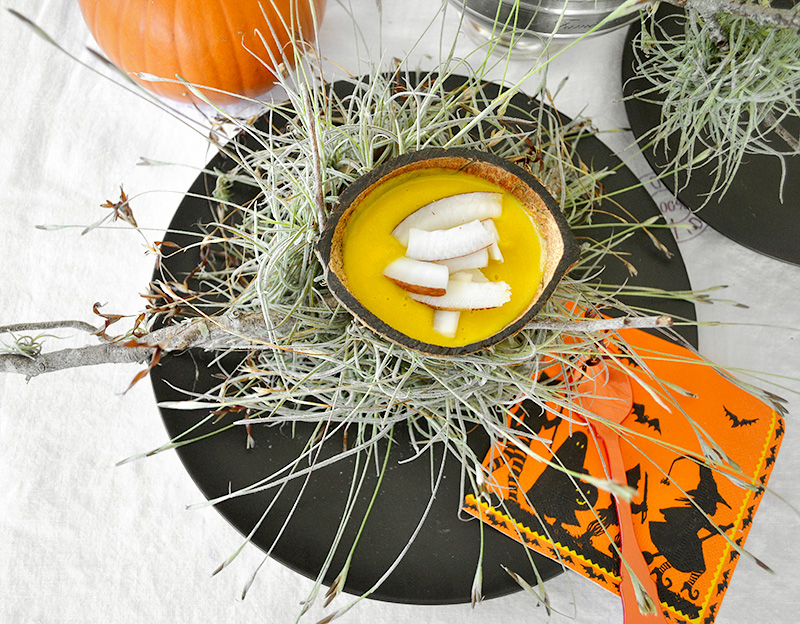 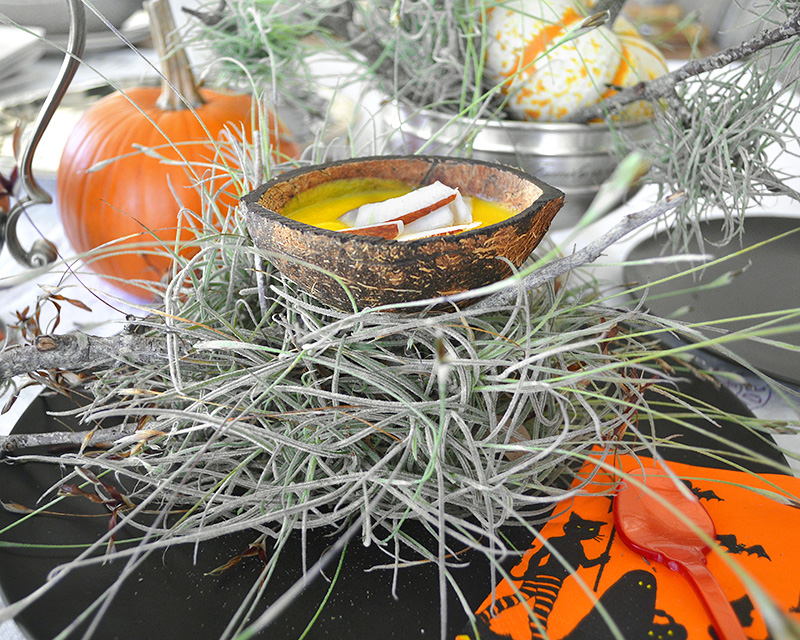 In a saucepan at medium heat, melt the butter and cook the onion and leek until golden brown. Add the chopped pumpkins and stir continuously for a few minutes. Add the water and orange juice, bring to boil. Lower the heat and add the cinnamon stick, turmeric, salt and garam masala. Cover and cook for about 30 minutes until tender. Remove the cinnamon stick and add the coconut milk. Puree in batches until smooth in a food processor or blender. Return soup to saucepan. Serve with the coconut slices.