Eating at My Friends’ House

Sicilian Caponata, It was delicious and addictive. An appetizer to serve with crusty bread. 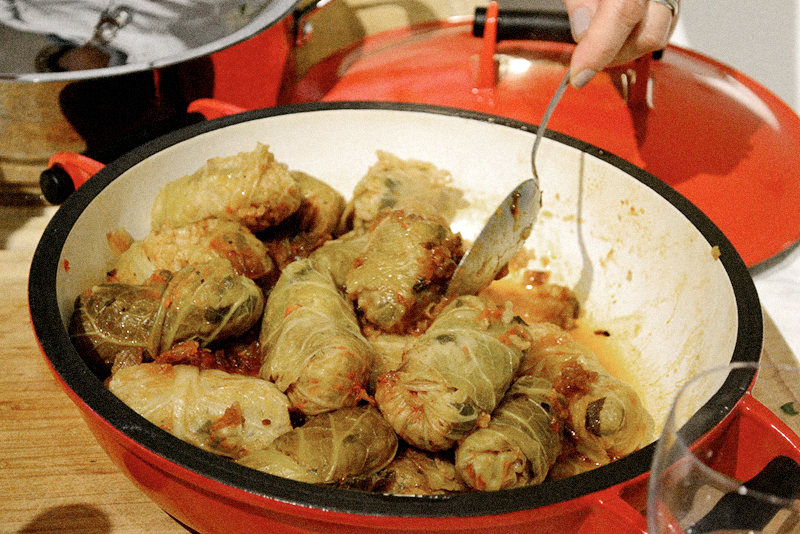 The cabbage rolls are stuffed with rice, onion, lemon and tomatoes.

This Jalea is like a marmalade made out of the coffee berry, just before it becomes a dry coffee bean. It is from Guatemala, I liked with Manchego cheese.

These lovely little boxes are black teas called Te Chirrepeco also from Guatemala. They add a cinnamon stick to the boiling water.

I fell like I was in France having the little Sushi (that’s his name) sitting at the table, he is so well educated. It’s so cute to watch his face expressions.

My friends gave me the recipe of this Sicilian Caponata, It is from an Italian book by LilianaTommasini. I like to have it on a  toasted baguette like a bruschetta. The recipe is perfect!

Preparation:
Wash eggplant and peel if desired. Dice eggplants in large chunks. Layer in colander, sprinkle with salt between layers. Let drain for approximately 2 hours. Meanwhile slice celery, leaves included, and cook in boiling water until soft. Do not boil if you like the ‘crunch’ of raw celery. Slice onions and fry in olive oil until soft, add tomatoes. Break tomatoes with wooden spoon. Let cook for five minutes. Add sliced green olives and capers. Add sugar. Taste the mixture. It should have a sweet and sour taste. If it is too sweet add vinegar one tablespoon at a time and taste again.
Drain and pat dry the eggplant. Heat oil in deep fryer on medium heat until hot enough to fry. Deep fry the eggplant in batches in vegetable oil until browned. Drain on paper towels. In a very large bowl (or bowls) layer the sauce mixture with the eggplant. Let cool. Then mix until all the ingredients are well blended. Wash and sterilize 8-9 16 oz. mason jars. Fill jars and cover. Caponata can be stored refrigerated up to one month. The caponata tastes better the next day once the flavours have had a chance to settle and blend.